​ ​The library has a display of the Arts of Asia: Chinese, Koran and Japanese Styles. I would like to thank Kent Rudasill (class of 1986), Robert and Christine Sahms and Dr. Henry Stevens for their contributions of items to the case. Most of the articles were gifts to them from their former and current students. Also on display is the periodical, Arts of Asia: The Foremost International Asian Arts and Antiques Magazine. This subscription has been a gift to the school library from Peter (class of 1975) and Lily Ferry for over five years, still continuing. The present edition Volume 40 number 6 is titled “Asian Arts at the Museum of Fine Arts Boston – Chinese Lacquer, Buddhist Paintings, Asian Textiles Japanese Rare Books, Indian Paintings, Ukiyo-e Prints and Chinese Paintings”. The school collection contains 42 editions of this subscription’s scholarly articles. (R.S) 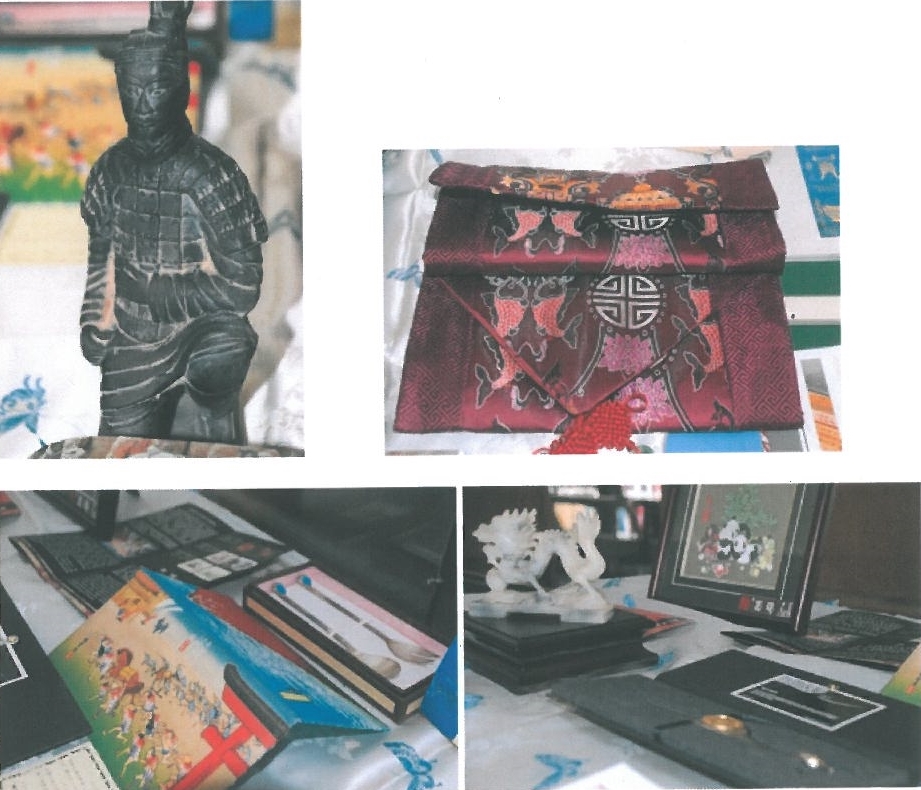 CO-EDUCATION – IT CAME TO PORTSMOUTH 20 YEARS AGO!
To celebrate the first-year female students were admitted to the school, as summer school students 20 years ago, a display of news articles and photographs was placed in the display case. Following the next school year, girls were again in summer classes, and then Portsmouth admitted them to the full school in fall of 1991. The color illustration was done that year by Mrs. Eileen McGuire, the Headmaster’s assistant. ​ (R.S) 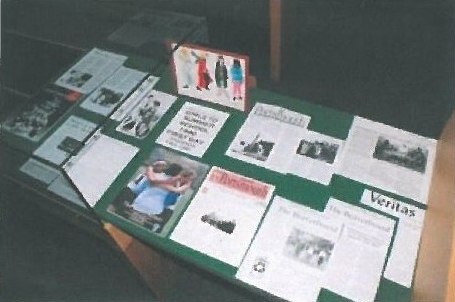 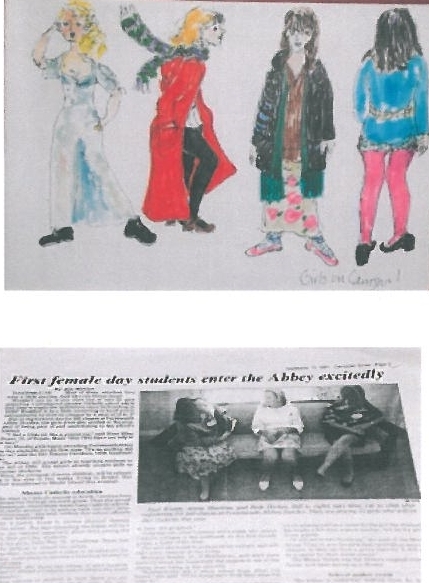 The library display for the summer of 2010 reflected the topic chosen for this year’s Portsmouth Institute, “Newman and the Intellectual Tradition.” The display was also timely due to the impending beatification of Cardinal Francis Newman in October. Included in our display were examples of the works and various photographs of the Cardinal that the Monastery and School. One, a copy of the Apololia Pro Vita Sua, was owned by Newman himself and has his signature and bookplate attached. Also displayed was The Idea of a University, upon which a school essay contest is based. Called the Raho prize, after its donor alumnus, the prize awards a monetary gift to be given to the winner who writes the best essay on the work. (R.S.)

In the Spring of 2010, we again did an exhibit on the history of the folk tradition of decorating Easter Eggs using basic examples that we own, photographs of the famous Faberge jeweled eggs, and photographs from the exhibit at the Knights of Columbus Museum. The latter pictures used were taken from the work Easter Eggs & Art that shows in beautiful, full photographs the Robert J. and Yvonne S. Klancko Collection, presented in 2006 by the Museum in New Haven, CT.

The library has a display this Easter of Ukrainian eggs created by Mr. Pete Pasternak. Part of the display shows the various stages of the work from the white blown goose eggs, through the pencil design, then to the wash stage, and finally the colorful application of the design.

It is called Pysanky, an age-old Ukrainian tradition of adorning eggs with beautiful, colorful and meaningful designs. There is also a key to the numerous designs on display, including the baskets, flowers, diamonds etc. that Mr. Pasternak used. The large egg on display is a blown-out ostrich egg, done in black and adorned with the Ukrainian’s favorite flower, the Poppy. It also contains numerous tiny baskets, dots and Greek keys in the patterns.

Mr. Pasternak also provided a copy of the Ukrainian folk tale of the poor peddler who leaves his eggs to help a man passing who is being crucified and returns to find the eggs beautifully adorned. (R.S)

This season the case was filled with articles from the medieval period including a pilgrimage badge, a chalice, and a page from the Visconti Book of Hours which showed an Illuminated manuscript page with a depiction of the nativity.
See the Newsletter section of the Portsmouth Abbey Library webpages for a description of the collection of Medieval Illuminated Manuscripts. (R.S) 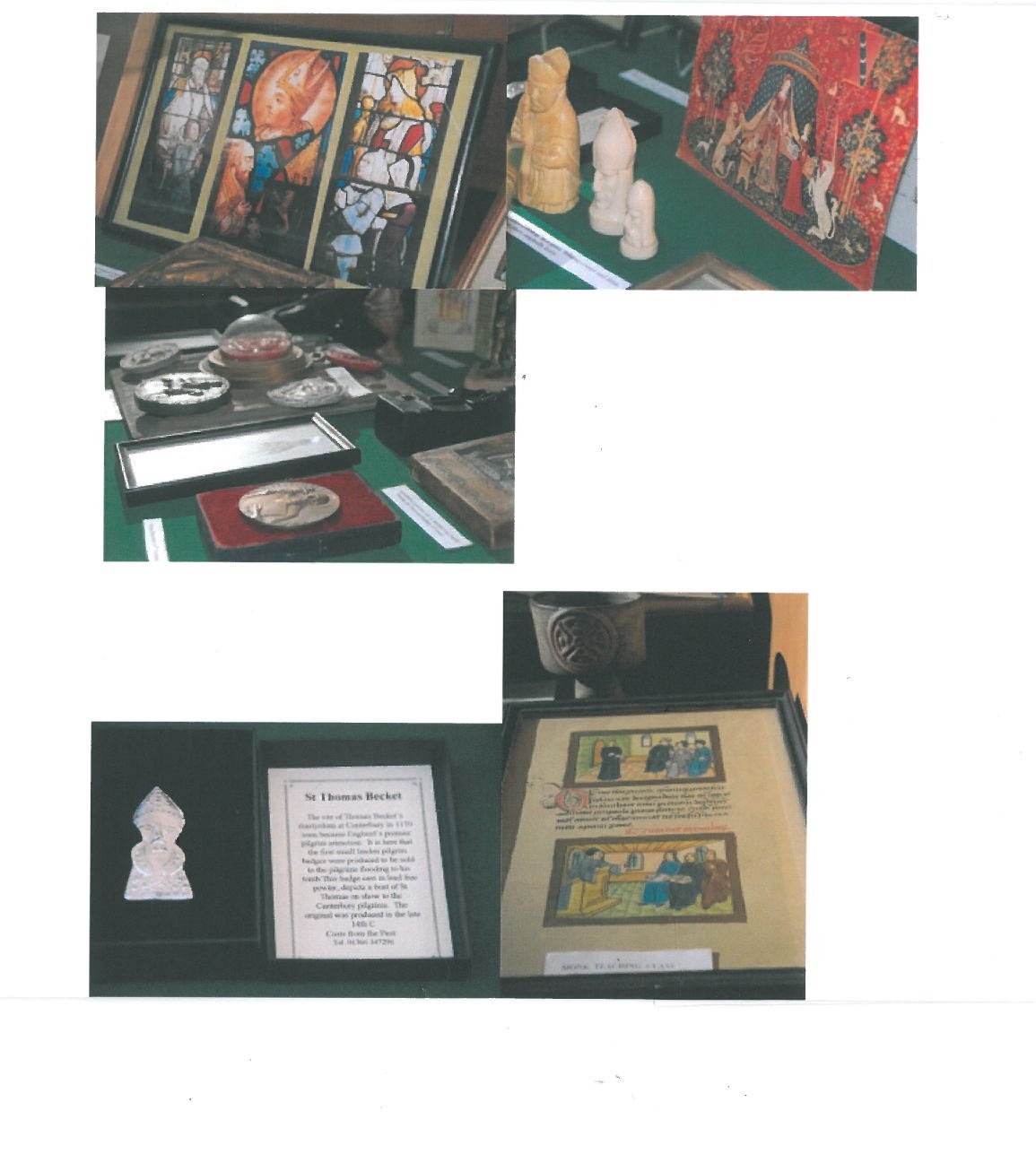 The exhibit walls of the library currently display the school’s collection of original masks and from the Pacific Islands, mostly donated by Peter Ferry, Class of 1975, with one piece donated by Mr. and Mrs. Nicolas Bonadies, parents of Anthony, Class of 1973. Oceania is the name of a group of more than 25,000 South Pacific Islands. This Pacific Island art was developed there in isolation from other influences. These are named Sepik, because they originate from the area around the Sepik River in New Guinea. The basic sculptural materials are wood. The masks show a belief in spirits whose forces could be honored by images, in the hope of appeasing the spirits uncontrolled forces in their natural environment. (R.S) 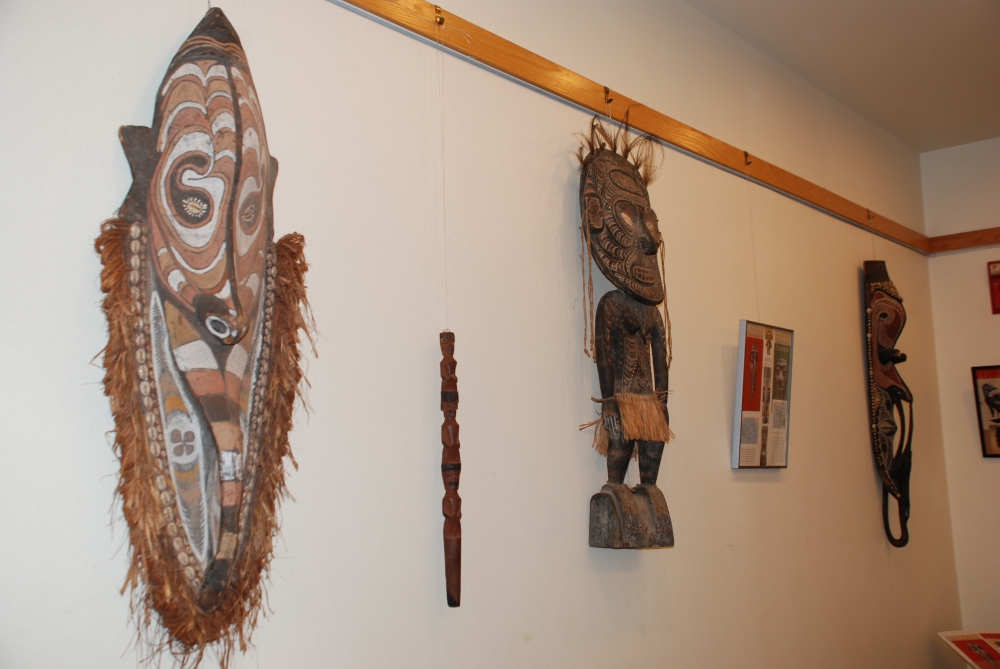 In conjunction with the three-day Portsmouth Institute event, held on the campus in June 2009, the exhibit for the summer featured the life and work of William F. Buckley, Jr., Portsmouth Abbey Parent of Christopher Buckley, class of 1970. Included were newspaper and magazine articles both by him for the National Review, of which he was editor for many years, and about him and his family for Vanity Fair Magazine, Yale Alumni Review, New York Times Sunday Magazine section, and the Providence Journal Sunday Newspaper travel section from 1992. There he was featured for his worldwide sailing adventures of which he wrote two books. Photographs of his visits to the school as a commencement speaker, articles in the school newspaper and copies of family notes to the monks were also included.

The newest Christopher Buckley book, Losing Mum and Pup was placed in the case. A display of nearly all of William F. Buckley’s 58 books of fiction and non-fiction were placed on the nearby bookcases. (R.S)

Spring 2009- Countries and State Homes of Our Students

During the Spring term 2009 the library exhibit featured the map locations, using pins of our diverse student body, with information on each location. In the display case were state and country flags, capital cities, state nicknames and other interesting facts about where our students reside. Trivia questions were also included for which the answers were placed elsewhere to allow the students to test their own world knowledge. (R.S)

February marks the anniversary of the birth of President Abraham Lincoln (Feb. 12, 1809 – April 15,1865), and the school had a program created by Dr. Fred Zilian on the 16th President’s life. The library had an exhibit in the display case including a plaster death mask and an additional bookcase set aside containing the most recently published books on Lincoln and his times. (R.S.)

The library was fortunate this winter to have a display of 26 pieces of Japanese netsuke, or Japanese toggles, from the collection of Stephanie Bange. A netsuke is a carved miniature sculpture, drilled with paired holes so that it can be threaded on a cord to serve as a toggle for a small case, meant to carry personal necessities, hanging from a kimono. Originally, netsukes were made from ivory, then wood, and even from nuts. Their themes include demigods, animals, birds and fish, urban scenes, and fairy tales and fantasy scenes. The intricately and beautifully carved pieces are thought to have been used beginning in the seventeenth century. Contemporary reproductions, made for sale in museum stores, are often made of resin.

Also included are six examples of inro, where the cord is attached. Shown below is the full display, an inro of a mother turtle and her young “kissing” at the opening point, bamboo and birds, a fish, and a cat above a cat. Pictured also were a netsuke of a rabbit and a Sambaso dancer. (R.S) 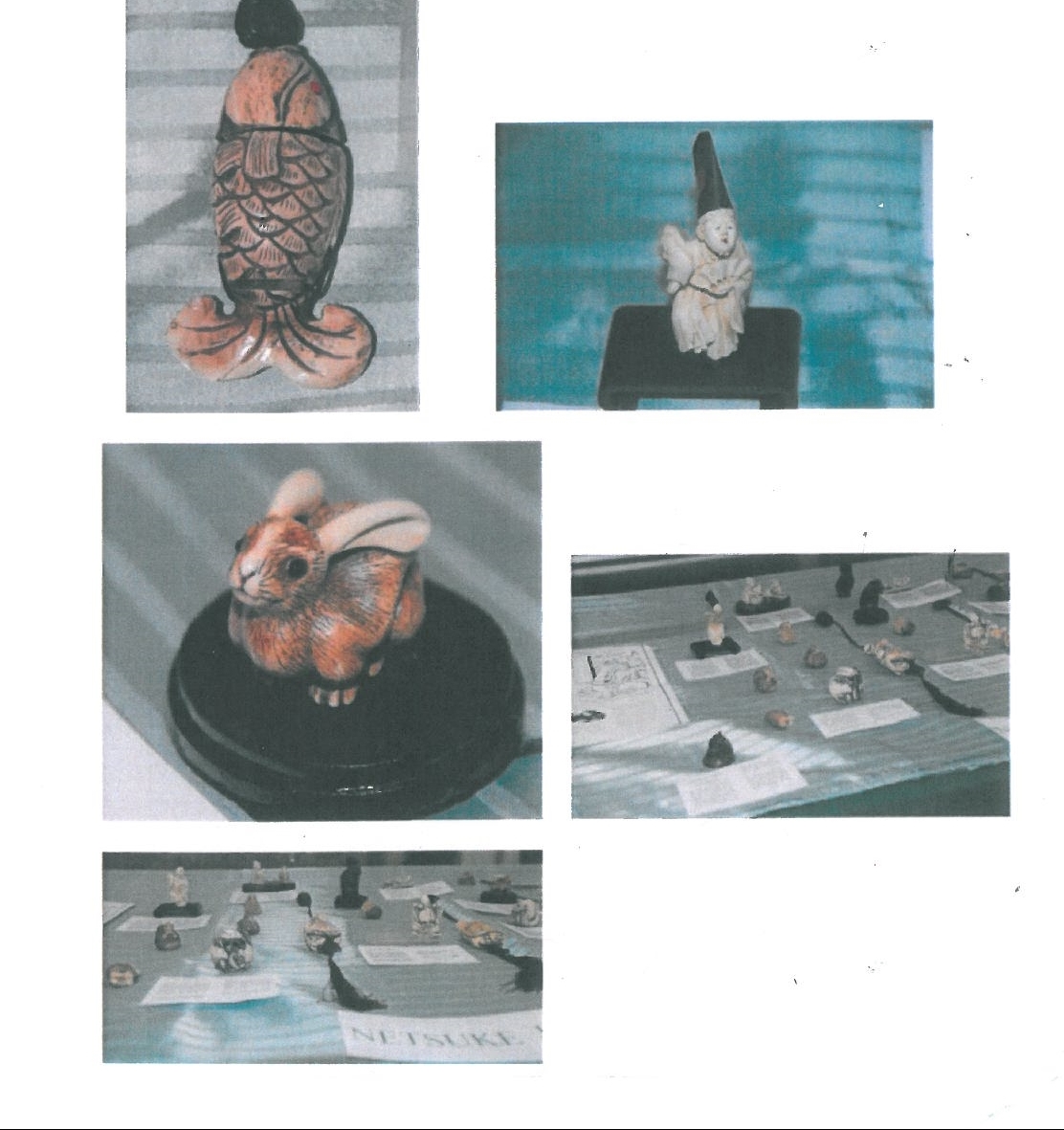 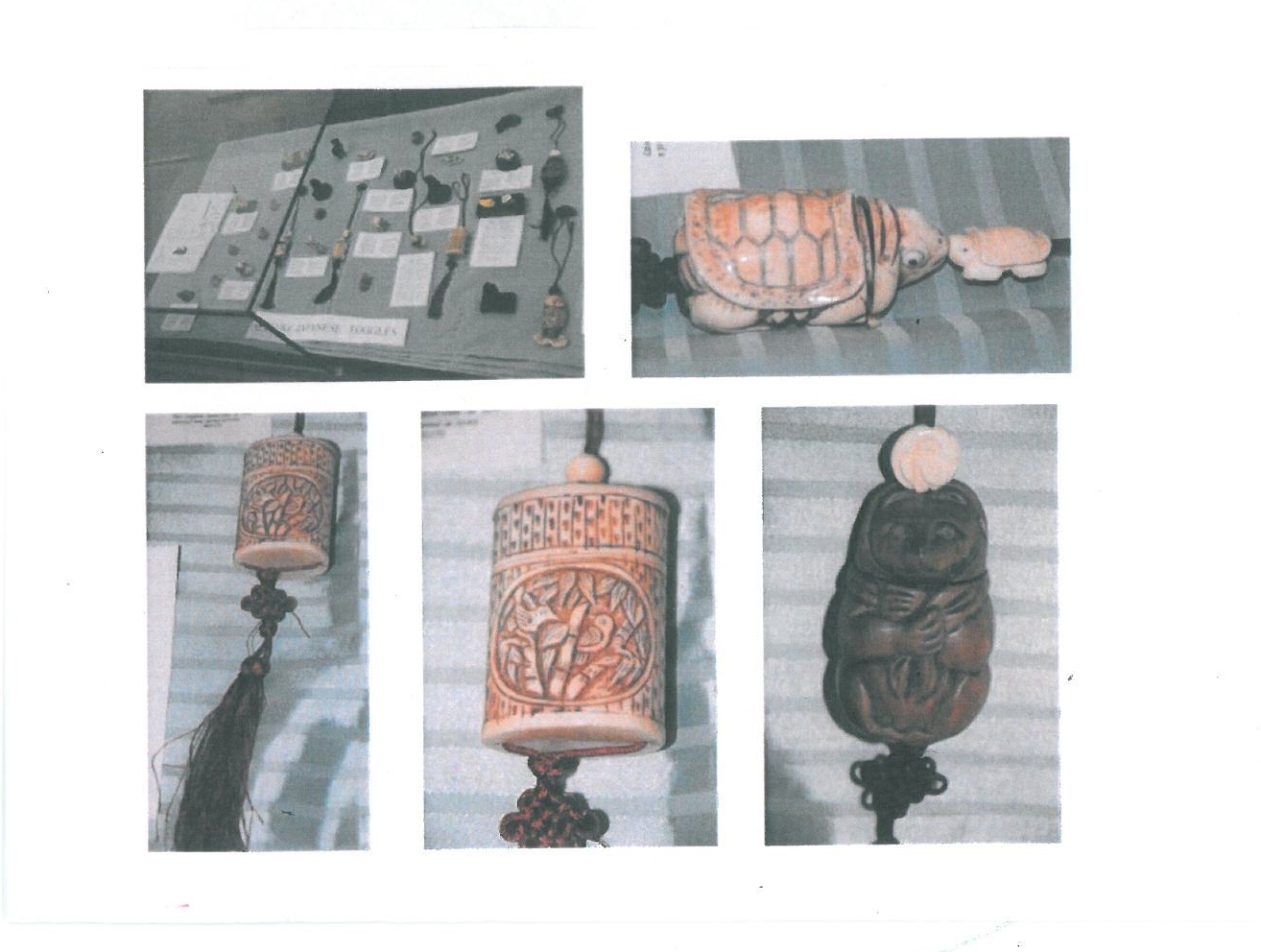 The Fall 2008 exhibit coincided with the school’s alumni weekend. A selection of the covers of 80 years of the Raven was on display. The Portsmouth Abbey School Literary magazine The Raven comes out once, maybe twice, a year and includes short stories, poetry, and drawings. Each coverer has either been drawn or photographed by a student. The “Raven” as a title was started in 1927 as a mimeographed newspaper with three issues each term. It contained news about the school and was augmented by some student created art sketches. a few years later (in 1920s and 30s) other school publications developed and became more thematic. The newspaper remained with news under a different title and by 1929 The Raven became the sole vehicle to publish literary and artistic works by our students.                       (R.S.)

During the summer and early fall of 2008, the Portsmouth Abbey library had a display of the Church renovation project, including the restoration of the Richard Lippold (1915-2002) gold wire sculpture, “Trinity”. Mr. Lippold visited the church before his death and at that time plans were formulated to repair the sprung and dulled wires.

The glorious gold of the open-work sculpture became part of the total church renovation project (including the building structure, stained glass and cross) begun in spring 2008. The art was dismantled and removed for restoration. Pieces of the gold clad wires were also in the display.

“Trinity” will be remounted again for the upcoming re-dedication of the Abbey Church of St. Gregory the Great in 2009. (R.S)

Additional ancient items from Peter and Lily Ferry-
The late spring, early summer, 2007 exhibit in the library was a display of the most recent donations from Mr. Peter Ferry ’75 and his wife Lily. Their former donations of ancient Greek vases can be seen in the special library cabinet in the “Library Newsletter” sections, Winter 2005-2006 and 2008. These new additions include Roman glass, ancient coins and additional ancient Greek vases.

The library has a display of actual valentine cards and postcards primarily from the period 1923-1929. 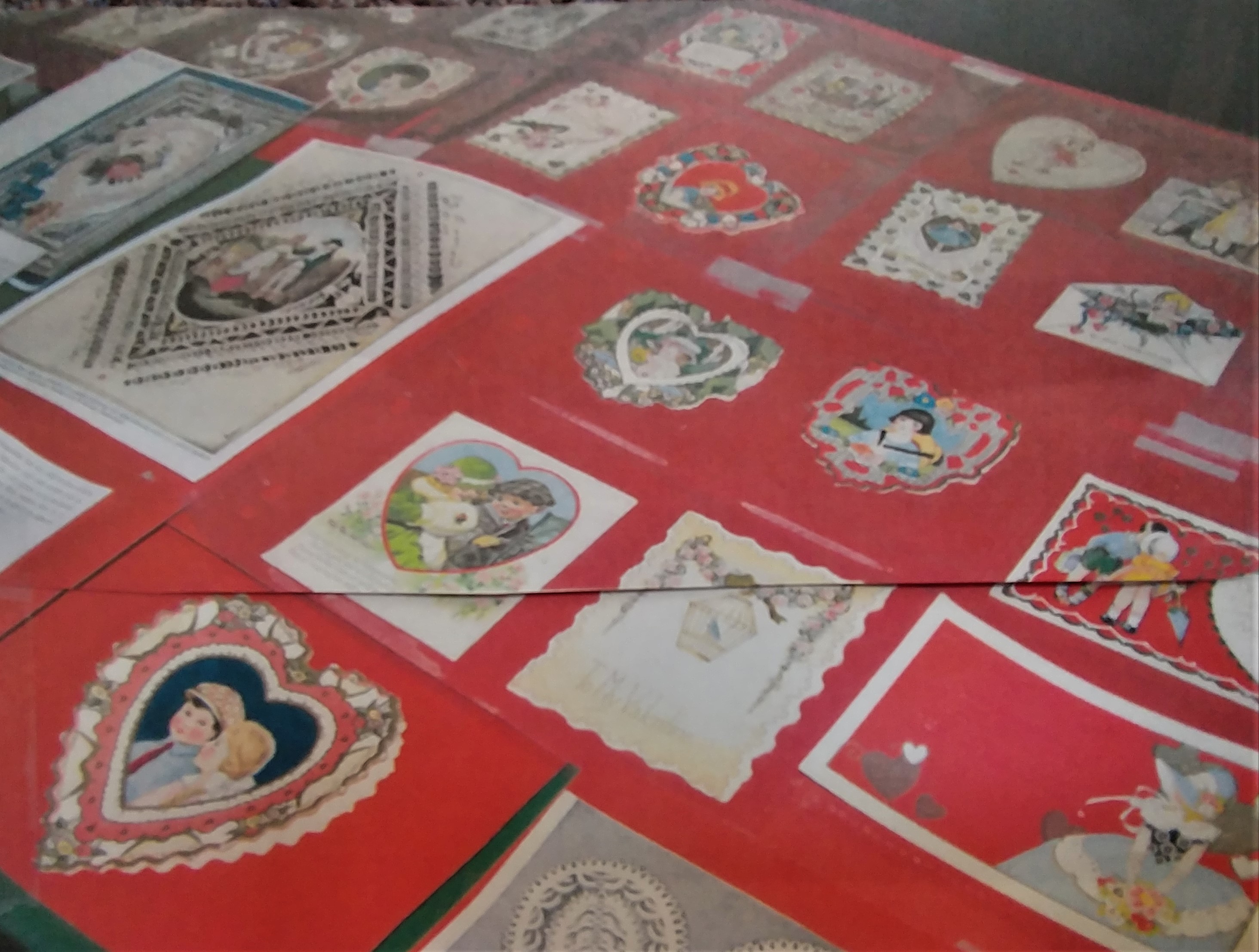 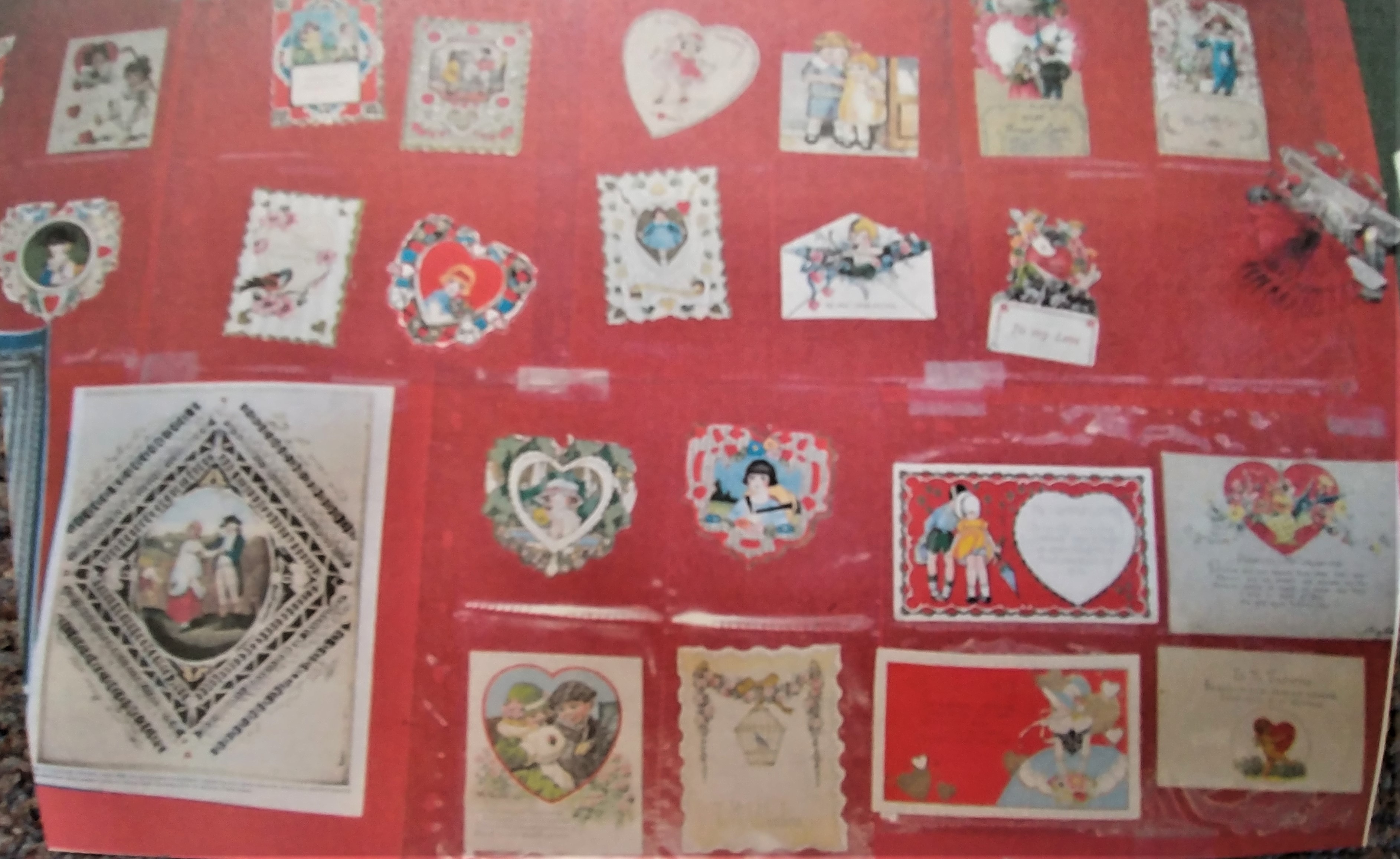 There is a history of Saint Valentine, examples of valentine, and love knots from the 1800s from the book The Valentine and Its Origins by Frank Staff, the old 1920s valentines and one or two from the 1930’s. 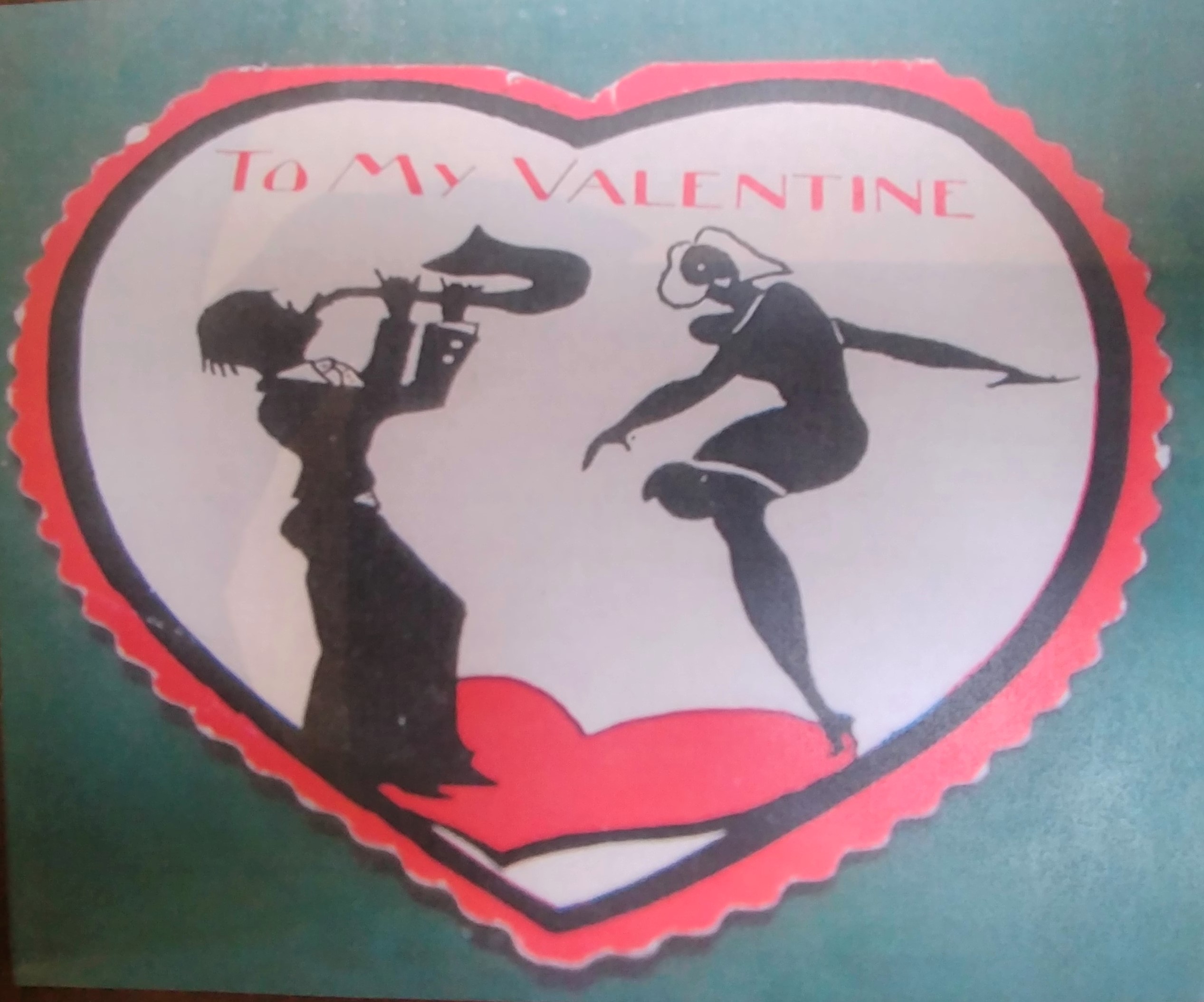 The cards are from the collection of Ann Maloney. One, from 1937, shows a pair of stylish jazz age dancers. (R.S)

During the late spring and the summer months a display of author’s homes and haunts will be in the display case in the library. ​
The postcards, photographs and descriptions were collected from the travels of England and America by Father Damian and of Mrs. Stevens. Also, part of her contribution there were British “first day covers” for all the stamps of the literary theme series produced for the (British) Royal Postal Service (an example, the Shakespeare Globe Theatre series). Also included is the Famous Americans Author series of stamps begun in 1940 and issued periodically by the United States Postal Service. (R.S.) 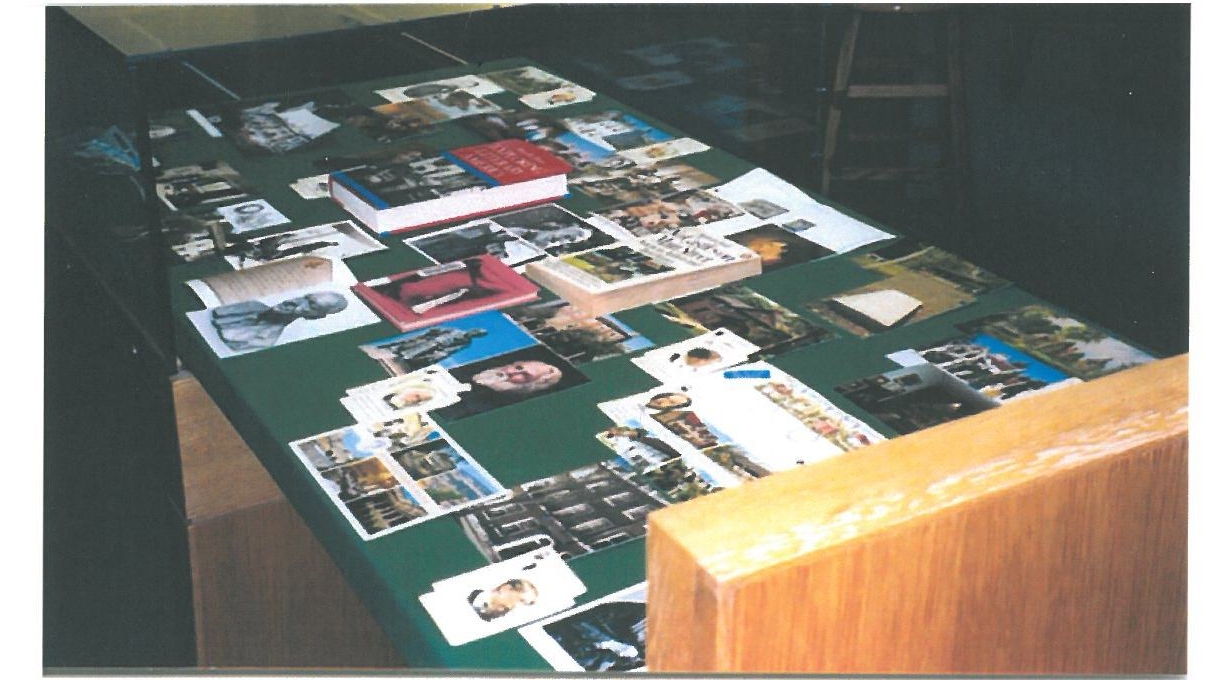