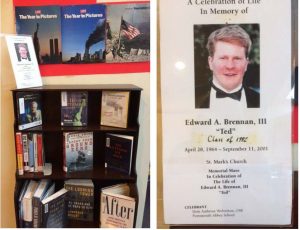 A new library display is up in memory of all who lost their lives lost on 9/11/2001, 20 years ago, especially our Portsmouth Abbey School alumnus,  Edward “Ted” Brennan III, of the class of 1982. Father Ambrose Wolverton, OSB of the Abbey celebrated the Memorial Mass. Ted was an employee of Cantor Fitzgerald, which lost 658 staffers on September 11, more than any other company or group of emergency responders. (R.S)