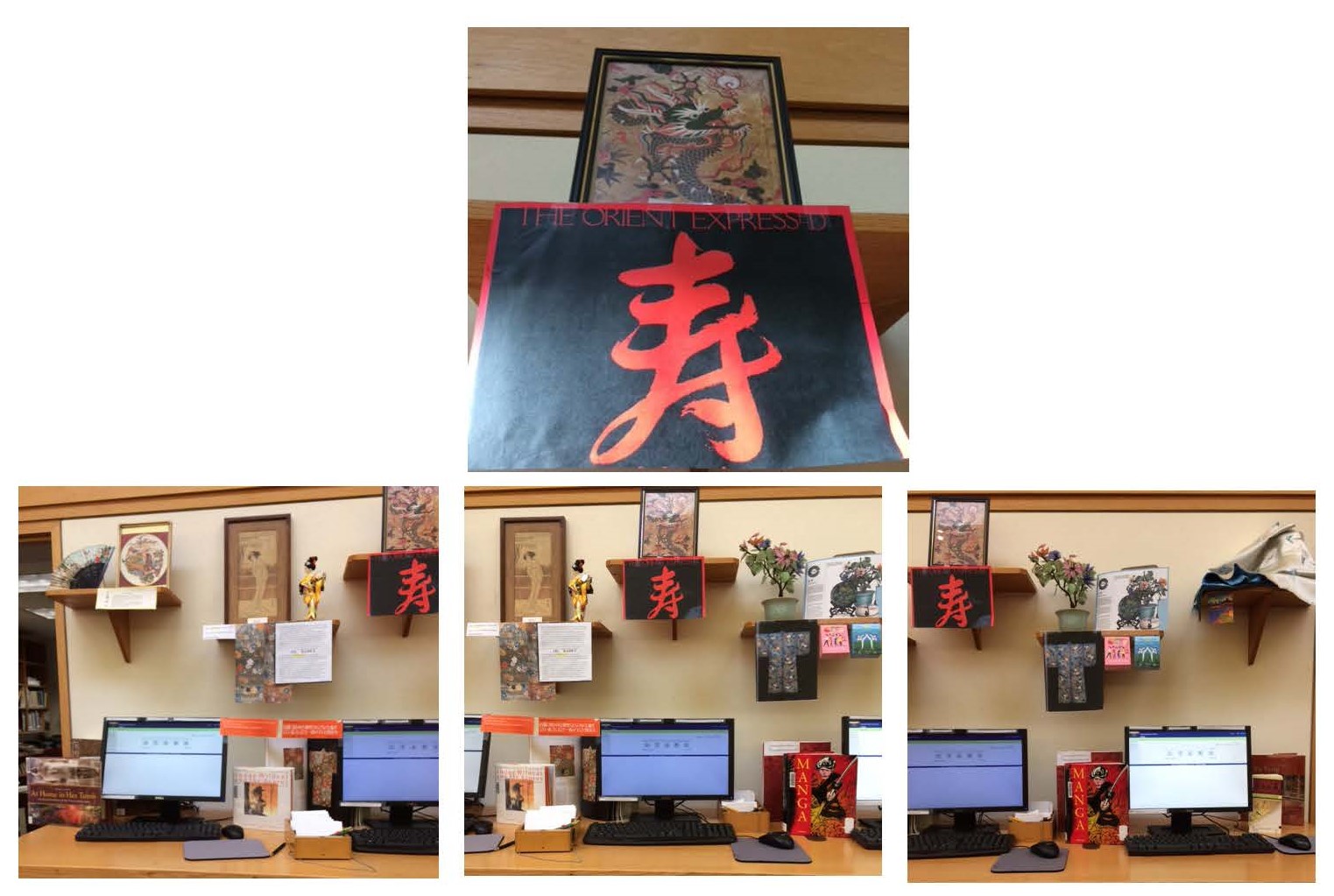 This new library exhibit displays a variety of interesting objects that invoke the beauty and history of the countries of China, Korea and Japan. The objects included this time are a bolt of Chinese silk in blue and silver thread, some contemporary illustrated box covers from Korean tea, a Geisha doll, an original wood block print”, Girl crossing the Tama River” by Harunobu circ. 1764-1772, a semi-precious stone leafed tree, an illustration done by Kinuko Yamabe  (b.1940) and information on historical No Robes for the theatre with pictures of museum examples of them. All are placed over our the computers.

In the glass case we have an ivory Foo dog with information, replicas of the some of the hundreds of military statues discovered underground in the the tomb of Emperor Quinn, fans depicting traditional and modern Japanese scenes, some origami examples, a rice paper case and card, old chopsticks housed in a vase and the sample and explanation of the folk tradition of the leaping carp. To enhance the display, books are included. They are on the computer table- China Through the Looking Glass; Patterns and Poetry : No robes from the Lucy Truman Aldrich Collection; Joomchi and Beyond; 清明上河圖 : A Riverside Scene at the Qingmins Festival, ( in Chinese ) a gift from Alumnus Wenting Xu; Judge Wildcat and the Acorns a children’s book ( a gift of faculty member Seibert who visited Japan in 2005 on a school grant); Yin Tu Tang, The Architecture and Daily Life of a Chinese House:; At home In Her tomb, Lady Dai and the Ancient Chinese Treasures of Mawangdui; and 丽江工作室壁画故事 : Lijiang Studio Murals; Contemporary Art Episodes in Rural China (in Chinese).

This exhibit compliments two older exhibits. One noted on our exhibits page was in winter 2010-2011. The other was in 2015 and created by Father Damian Kearney, O. S. B., of Portsmouth Abbey who used the library and classroom building to highlight some “Original Works of Asian Art at Portsmouth”, during February 12 – April 14, 2015. These included Chinese pieces Terra Cotta Tang Horse,( 6th century BC, Gift of William Rives class of 1967); a wood carving, “Philosopher” (18th century); “Dragon,” (20th century), etching on bronze plate “Tutor and Students (18th century); Portrait of Abbot Matthew by Yuqi Wang (2006) and a calligraphy poem (20th century). Shown from South Korea were two matched prints “Daffodils,” “and “Flowers and Birds (19th-20th century). Also from Japan, were a Stone Lantern (16th century); a painting by Yoshida Hiroshi (d.1950) “House in a Grove”, and the prints “Peace and Swallow in Moonlight”,” Two girls crossing a River, and Shenko Geisha (all 18th century).     (RS) 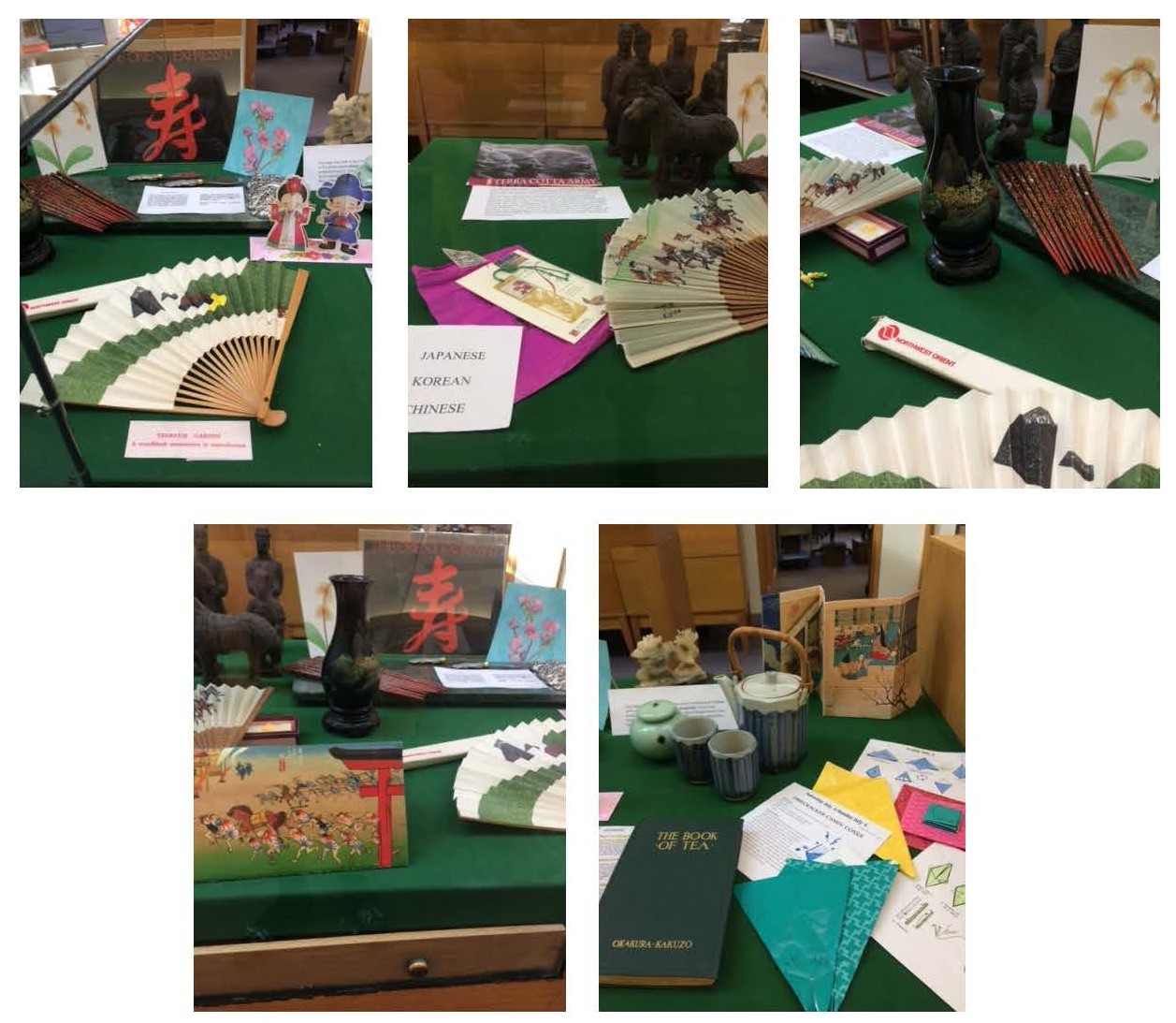 The library has a new display in the case called “Name the Game”. Beside each iconic game item is a number. Identify each of 11 games and if one stumps you as for the key at the desk. Accompanying the display are three books from the school library collection- Play at Work, How games inspire breakthrough thinking By Adam Penenberg 2013;  The Design of Childhood, How the material world shapes independent kids By Alexander Lang (2018) and The case for make believe;  Saving play in a commercialized world By Susan Linn  (2008). (RS) 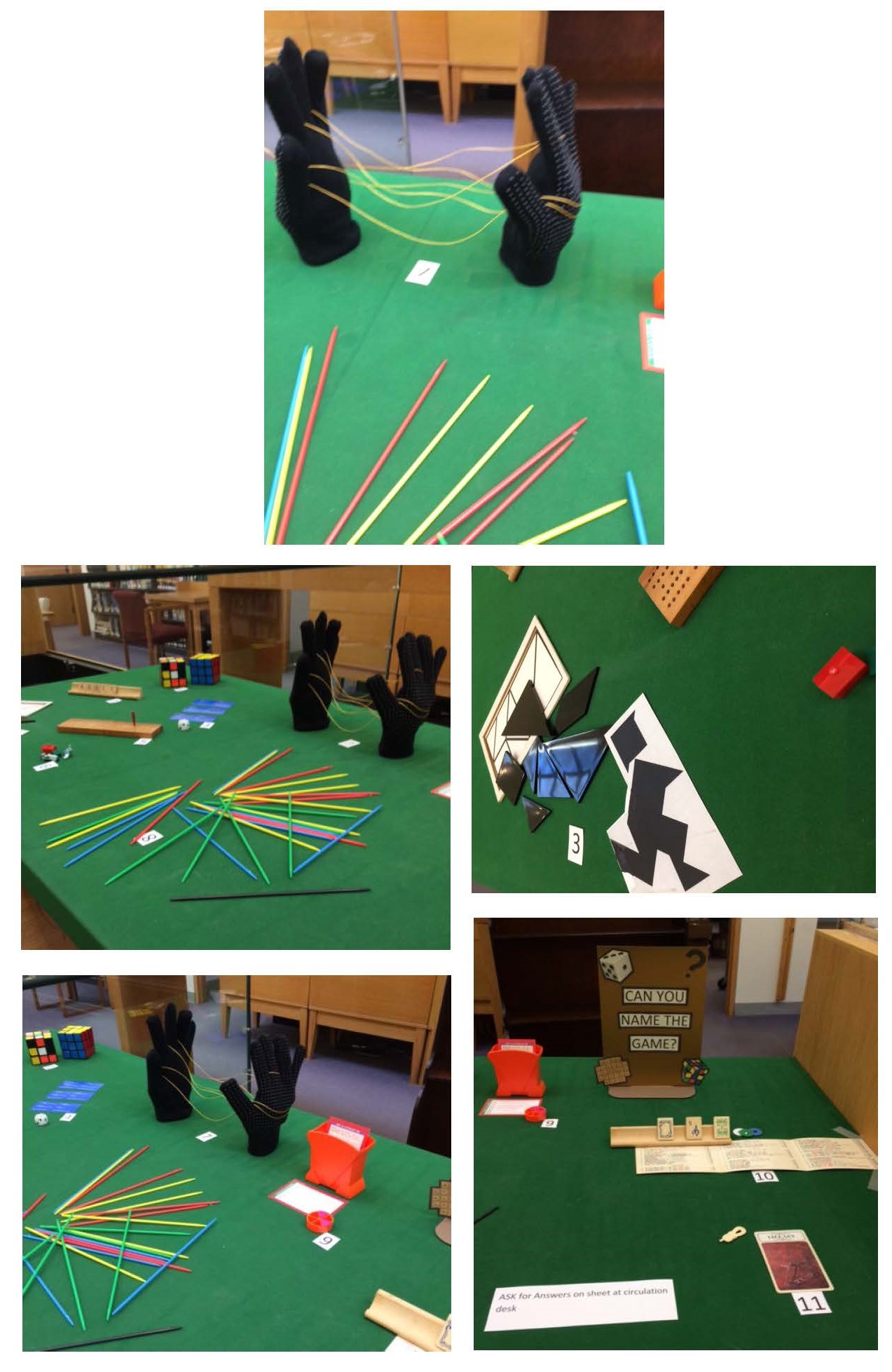 The Fall display on the walls of the library is focused around Shakespeare and his work Hamlet. There are panels about Shakespeare’s life and times, his family, and the Globe Theatre.  Two posters depict National Theatre Hamlet productions.  Also featured is a panel of playbills mounted by Father Damian, O.S.B,, a student here and later head of the English Department who collected playbills. The top two rows feature ones for Portsmouth Abbey Drama Productions of Shakespeare’s works  in the 1950’s (row 1 ) and the 1980’s and 1990’s (row 2). Our fall school Drama production this year is Hamlet.   (R.S.) 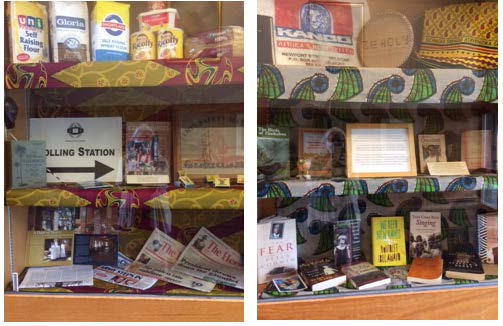 The library lobby floor has a new display created by Brother Sixtus to celebrate and acknowledge the 25th anniversary of Zimbabwe. This is his message on the sign in the case.

The Monastery of Christ the Word is located in Macheke, a small town located in the province of Mashonaland East, in eastern Zimbabwe, about 105 km southeast of Harare, the capital.

It is a dependent priory of Ampleforth Abbey in Yorkshire, England, and was founded in 1996.  It belongs to the English Benedictine Congregation (EBC) just like Portsmouth Abbey.

On two separate occasions, in 2008 and 2016, Br. Sixtus of Portsmouth Abbey was invited to live, work and pray with the monks on a mission in Zimbabwe.  To mark the 25th anniversary of the founding, these cases display some of the objects he collected while there or which he acquired upon his return.

2020 marked the 70th anniversary of Earth Day and we were distance learning during the pandemic, so an exhibit was not possible. This year however we created an exhibit around the theme of Perpetual Earth Day.

The Benedictine monastic community takes a vow of stability. It is well suited to sustaining the natural environment for future generations. Our monks have been doing so for many years. So, this exhibit highlights some of these endeavors. Each of the buildings meets the highest standards for energy efficiency and beauty when it is built. But there are subtler signs of the ongoing commitment to the Good Stewardship of God’s Earth at the Abbey. Early pictures show a vast farm, a windmill and open space at water’s edge. From that came fields of corn and hay, sheep, beekeeping, wooden and stone bridges, as well physical symbols of our religious commitment here, such as cross hill, and the grotto (which was created with boulders from the land). The turbine, electric security cars, food grease reuse in the dining hall,  repurposed cobblestones from a Fall River street project,in the administration courtyard, RISD challenge solar house, modular Blue homes, and  the new science building each enhances the ongoing drive to steward and husband the gifts of God’s land. The monastery’s initiative in blocking an ARCO petroleum refinery planned for Arnold’s Point (where the white tower is) in the early 1970s was the occasion that established SAVE THE BAY since the monastery and they were partners in the cause. Perhaps the  most significant endeavor to date however, is the lease of the 300 acres of land being committed to a golf course rather than to being sold, which perpetuates that open space for many years. Truly the Abbey is a beautiful example of care and concern for the natural environment.     (R.S)

20 years ago this spring,  2002 we had an Easter display about these beautiful rare and fabulously expensive gifts of the Czar of Russia to his family members in the late 1880’s and the early 1900s. At the time they were mostly held by Malcom Forbes, (1919-1970) businessman and publisher, avowed capitalist, ambassador and wealthy collector.

“As Forbes amassed more eggs he was determined to possess more imperial eggs than the Soviet government. “It became essential for him to outdo the Kremlin,” recalls Géza von Habsburg, a former Christie’s executive, Fabergé expert and a Forbes collecting consiglier. And in 1985, he appeared to have accomplished that goal when he purchased the eight-inch, pearl-encrusted, violet-colored Cockerel Egg–which includes a functioning cuckoo clock–for $1.8 million.  He also acquired the Coronation and the Lilies of the Valley–for roughly $2 million combined. With that acquisition, by Malcolm’s count, he owned 11 Fabergé eggs–a number that would grow to an even dozen by the time of his death in 1990–while the Kremlin had a mere 10. Forbes was started in September 1917,” notes Malcolm’s son Christopher.” (Adam Brown, Forbes, 9/19/17)

But as the Forbes magazine empire dwindled Mr. Forbes decided to auction his Faberge collection (180 items-12 eggs) in January 2004. At the time he held the largest grouping of eggs the held outside the Kremlin. Only 50 were made and 42 are known.

The estimate for the April sale was $90 million to $120 million dollars. The highlights were 9 jewel encrusted eggs, created by Carl Faberge, the single most expensive of which is “Coronation Egg” (1897) to mark the ascension of the throne of Nicholas II.

Then came the surprising news that Russian oil and aluminum tycoon Viktor Vekselberg (45) had purchased the Forbes collection of the nine Faberge eggs for an undisclosed price, pre-empting a public sale at Sotheby’s planned for April, using private negotiations with Sotheby’s Holdings Inc., People close to the deal say the price for the eggs and an additional 180 Faberge items owned by the Forbes family reached about for the sale of 100 million).”

Meanwhile since 1947 The Lillian Thomas Pratt Collection of Imperial Jewels at Virginia Museum of Fine arts has held more than 300 objects (with some Imperial and miniature Easter eggs) which were bequeathed by Ms. Pratt.

To compliment the materials in the case Mrs. Vesey created beautiful decorated pseudo Fabergé Eggs for over the catalogs and added information about he eggs that have not ben found yet! (R.S.) 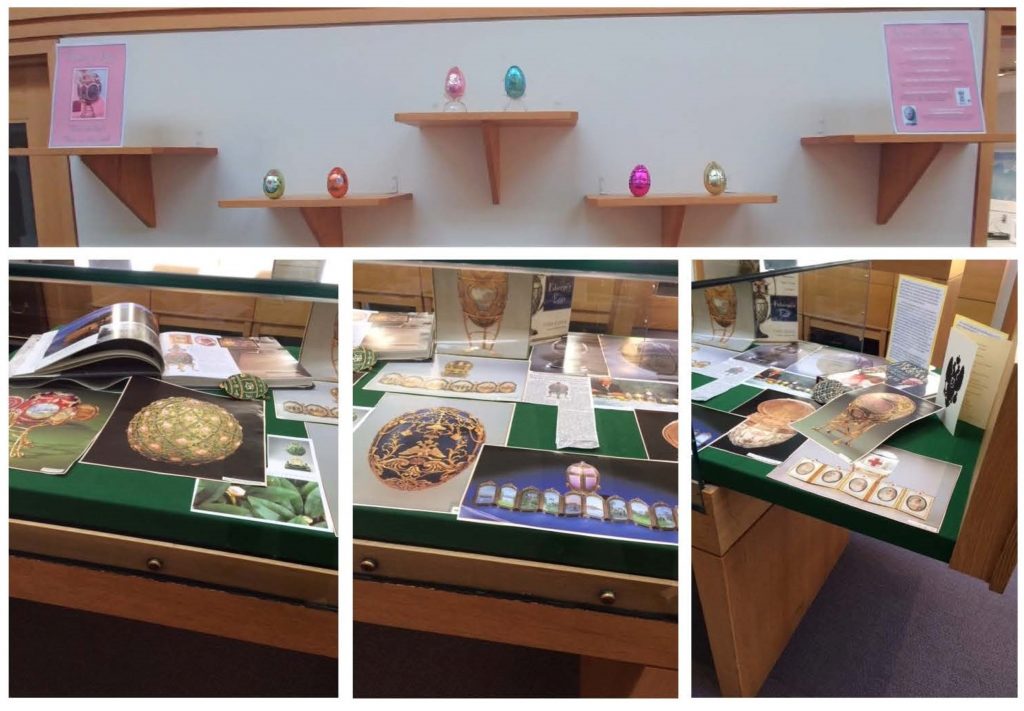 In February, the library displayed books and items related to the Fourth Estate. The term Fourth Estate has its origins in France. Prior to the 1789 revolution, the French parliament was known as the Estates General. There were three estate groupings — the clergy (First Estate), the nobility (Second Estate), and the commoners (Third Estate). The press, which watched over the other three, was the Fourth Estate. In the United States, the term is sometimes used to place the press alongside the three branches of government: legislative, executive and judicial. The Fourth Estate refers to the watchdog role of the press, one that is considered important in a democracy.

Items featured in our display case included a memorabilia page from The Los Angeles Times, April 16, 1912 edition (featuring the Titanic tragedy) and a photocopy of the New York Times front page dated April 13, 1861, which included headlines related to the attack on Fort Sumpter, a seminal event that sparked the cessation of the Confederate states, which ultimately led to the Civil War. Various other items used to access the news, including a small TV (replica), radio, and iPad were also on display.

A nearby bookcase featured books and films related to the Fourth Estate, including The Murrow Boys by Stanley Gold and Lynne Olson, A Reporter’s Life by Walter Cronkite, The Chief by David Nasaw, American Pravda by James O’Keefe, Passport: The Global Lectures by author alum Christopher Ogden, Arrogance and Bias by Bernard Goldberg, Governing the News by Timothy E. Cook, What the People Knew by Richard Reeves, The New Censorship by Oel Simon, and The New York Times Page One, an illustrated history of the established newspaper’s front pages from 1900 to 1997. The films Cronkite Remembers, The Edward R. Murrow Collection, The Post, and Newsies were also on display. (MFV)