The Portsmouth Abbey School library has been cataloging the video collection into the library data bank. Nearly 500 videos are available for faulty and students for doing assignments.

In conjunction with the 75th anniversary weekend in September, a large display was mounted in the library. On display were books written by alumni, faculty and parents of alumni. Father Damian brought memorabilia from the early years of the school for the glass display case, including diplomas and commencement lists from the 1930s, many pictures of the first campus and the subsequent changes, and portraits of our founders and of early students and faculty. Hundreds of artifacts were dispersed in the building’s display areas for the first term, which many returning alumni enjoyed.

Later, Veterans Day was commemorated by adding photographs to the display of the school’s deceased who served in wars. Also included was a portrait of our Portsmouth Priory Benedictine monk, Father Lawrence McGinn, O.S.B who became a chaplain in World War II and continued to serve in the military after the war. A War Memorial had been placed in the side chapel of St. Basil in the Abbey church. The stone tablets were designed and carved by John Hegegauer, a sculptor. Depiction of the memorial was included in the display case.

The next display, for December, was antique stamped tin toys of the 1930s and the 1940s. These colorful items were from the collection of Tom Casselman a resident of Portsmouth and husband of the Abbey summer Elderhostel art teacher, Izabella Casselman.(see exhibits).

The current display is of the wood turned bowls and cups, created by Abbey sixth former, Michael Kroger. Michael began his hobby in August of last year. One early piece, beautifully done in beech wood was made from a felled Abbey tree. The woods he uses now come from all of the world. (see exhibits),

Two new additions have been made to the many artworks permanently housed in the library. A seascape “Surging Waters-Ogunquit, Maine”, was done by the American Impressionist oil painter of the late-nineteenth century, William Otis Swett Jr., who lived in New England. Secondly, an antique secular tapestry depicting an idyllic garden scene, which measures 14 x 18 inches, was installed. Its height requires that it hang on the wall of the lower level of the library. The William Heysman Overland (1851-1898) piece, “Soccer Game” has been moved to the Donald McGuire Art Building.

Following an exhibit of his works in the Art Building, Jose Soares, father of Sixth former Philipe, has donated a large canvas of the harbor of Ponte Delgada in the Azores to the school. It has now been placed in the lobby of the Burden Classroom building, at the base of the stairs leading to the St. Thomas Moore Library.The

Manuscripts in the Library

The Portsmouth Abbey School library is fortunate to have several authentic manuscript pages in its collection. Manuscript pages can have the Mass or prayers, without notes, thus for reading only, and very often these have beautiful illuminated first letters. Those pages with notes are for the singing of prayers and hymns (either at Mass or at the Order’s prayers, the Divine Office). The pages have the notes to be sung. and usually the Latin text of the chant. They also can have illuminated letters.

These text pages appear in two formats, the first is the simple but large choir master pages, the text of which is done in two colors, red and black. The second is the more elaborate illuminated page which has the initial letter painted with designs and sometimes scenes from the Bible or lives of the saints. The library has four examples of the choir master pages that have only text and pause symbols as instruction. We also have two examples of the illuminated pages, both from an Italian antiphonal, (circa the 15th century). They were photographed for use in the summer bulletin article on Gregorian chant at Portsmouth Abbey by Dom Julian Stead, ’43 and one is shown here. 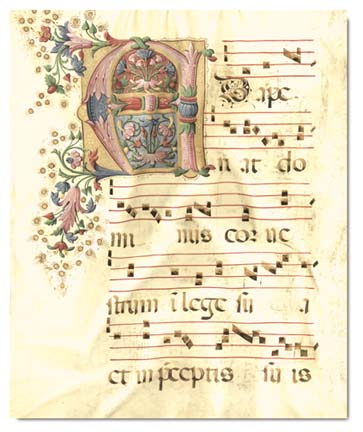 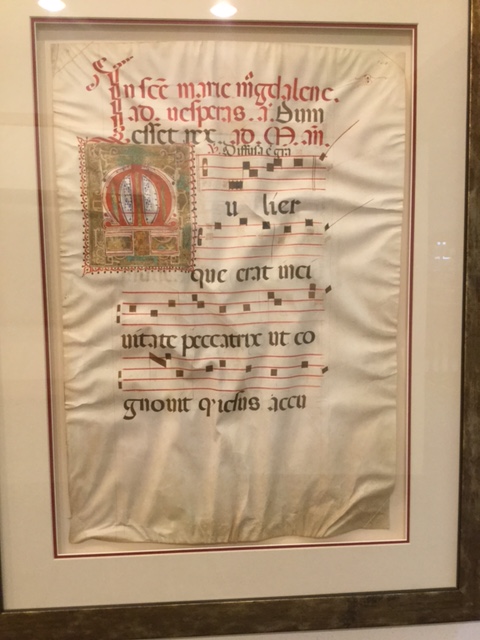 The notes for the chant are seen on these pages as a series of square strokes (not the “flagged” shaped notes of contemporary sheet music). The long and short strokes provide the time and thus the rhythm of the language and music.

The monks of the abbey sing this sacred music. This past May a full choir, Gloria Dei Cantores Schola, sang a service of chant in celebration of the school’s 75th anniversary. The library owns two of the over 40 CD disks produced by the chorus, “The chants of Christmas”, and “The chants of Easter” as part of its collection. For more information see http:// www.gdaf.org/schola/.

To mark the annivarsary of September 11, 2001, Father Damian Kearney,’48 created a display of newspaper articles, photographs and books for the library at the opening of school. Included in the display was the New York Times obituary of Edward “Ted” Brennan III,  Class of 1982, who had been a bond trader with Cantor Fitzgerald. The booklet from his memorial Mass, which had been celebrated by Father Ambrose Wolverton of Portsmouth Abbey, was also included. Also part of the display was a dramatic color photograph of the former World Trade Center Towers taken by Father Christopher Davis, ’48.

25 Years of Library in the Classroom Building 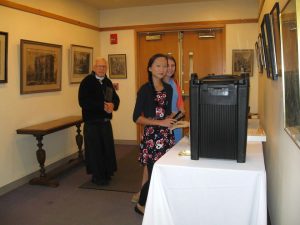 October 28, 2016 marks the 25th Anniversary of the “new” school library addition to the Burden classroom which was constructed for a move from the manor house first floor lobby where it had been located. The displayed contained the original invitation, photos of both “old’ and “new’  libraries, construction plans and photos, school newspaper articles and addition shelving space and utilization projections.  For a few hours during the day students stopped by for refreshments and to view the displays.

With the publication of  Father Paschal’s  latest book, we displayed books and significant magazine articles written by present and former Portsmouth Abbey School faculty. Included were works by monks and lay faculty; works in the fields of classics, theology, history and adult fiction are represented as well as a few children’s books. At this time there are 116 items in the collection.

The library has just finished cataloging the books donated by the estate of Thomas Head ‘ 74. Professor Head taught History especially Medieval Studies at a number of colleges. His collection of 648 items and 3 bookcases were added. These complement the 123 Kathleen Biddick Medieval Studies books (she is an aunt of graduates) donated by Professor Biddick in the 2013-14 school year