On a recent visit to the library by a writer of architectural history and an article of important examples of modern architecture in the state of Rhode Island in the February 10, 2002 Providence Sunday Journal Newspaper prompted the creation of an exhibit in the library of the works by and about Pietro Belluschi.
Belluschi (1899-1994), an Italian born architect who headed the architecture program at M.I.T., designed all the buildings surrounding the “Holy Lawn” on campus between 1960 and 1991. He had done modern skyscrapers, office towers, and theatres as well as churches.
Bill Van Siclen of the Journal calls ours,”the states’ finest group of modern buildings”. Clockwise, they include the Cortazzo Administration Building  (1967), (auditorium 1966), the science building (1966), the dormitory complex (1973), the gymnasium, (1983), the Burden Classroom Building (1980), (the St. Thomas More Library (1990), the St. Gregory Abbey Church and Monastery (1960), and the Stillman Dining Hall (1960), (Nesbitt Infirmary, 1967); a total of eleven buildings.
The library has some interesting books on Belluschi and his works as well as a bibliography and some prints. These include, Modern Church Architecture by Albert Christ-Janer and Mary Mix Foley, The People’s Architects by Harry S. Ransom, Built in USA: Post War Architecture, ed. by Henry-Russell Hitchcock and Arthur Drexler, Spiritual Space: the Religious Architecture of Pietro Belluschi and Pietro Belluschi: Modern American Architect by Meredith Clausen. The bibliography is part of the Vance Bibliographies Architectural series, # 2123, by Anthony G. White.
While we are still seeking to add to this collection, we wish to own one book in particular, Pietro Belluschi : Edifici e Progetti =Buildings and Plans, 1932-1973 a catalog edited by Camillo Gubitosi and Alberto Izzo in Italian but including mostly photographs. The work of Belluschi at the school was also documented in numerous articles in Architectural Record magazine some of which we also own.
Christ-Janer and Foley used a color photograph of the interior of the church and the beautiful Richard Lippold (1915-   ) wire sculpture of the crucifixion as their cover for Modern Church Architecture in 1962. Just this year, the annual Benedictine Yearbook 2002, “a guide to the abbeys, priories, parishes and schools of monks and nuns following the Rule of Saint Benedict in Great Britain, Ireland, and their oversees foundations” published by the English Benedictine Congregation Trust, has the same photograph, our own Saint Gregory’s Abbey interior, on its cover, thirty years later than the first book cover. (R.S) 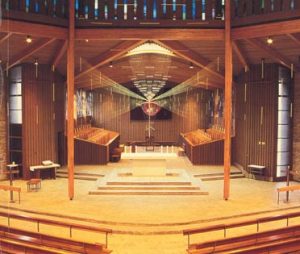