Two new additions have been made to the many artworks housed in the library. A seascape titled, “Surging Waters-Ogunquit, Maine,” was done by late-nineteenth-century American impressionist oil painter William Otis Swett, Jr., who lived in New England.

Secondly, an antique secular tapestry depicting an idyllic garden scene, which measures 14 x 18 inches, was installed. Its height requires that it hang on a high wall . 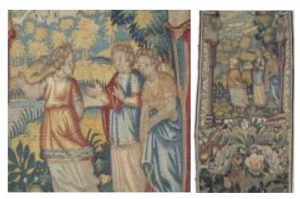 A  very large painting was added.

Following an exhibit of his works in the Art Building, Jose Soares, father of Sixth Former Phillipe, has donated a very large canvas of the harbor of Ponte Delgada in the Azores to the School. It has now been placed in the lobby of the Burden Classroom building, at the base of the stairs leading to the St. Thomas Moore Library.                        (R.S.)